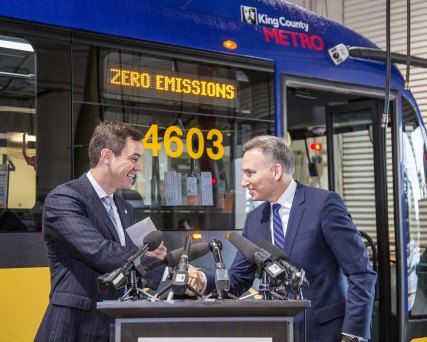 King County Executive Dow Constantine is accelerating the transition to zero-emissions transportation by making one of the largest bus fleets in the US all-electric by as early as 2034. Under his leadership, and that of DOT Director Harold Taniguchi and Metro General Manager Rob Gannon, Metro is not only upgrading its fleet to battery-powered buses, we’re demonstrating that there is strong market demand for the new generation of cleaner, quieter buses that can help King County confront climate change.

In January, Executive Constantine announced Metro’s commitment to purchase 120 battery-electric buses by 2020.  In April, he secured a deal with Puget Sound Energy, called Green Direct, which, starting in 2019, will power 98 percent of King County’s buildings and facilities in PSE’s territory, including Metro’s bus charging stations, with clean wind electricity generated by a new windfarm in Western Washington.

Then at our Zero-Emission Battery Bus showcase in September, Executive Constantine and Director Taniguchi convened experts from transit agencies across the United States and Canada to chart a course to toward a zero-emission transportation future. He also challenged the bus industry to further develop 60-foot articulated buses and longer-range buses to someday replace the ones in Metro’s fleet. As the leader of the nation’s fastest-growing transit agency, he also called upon the industry to standardize a universal system of charging stations that work with all battery bus types, to avoid the need for different plugs and charging networks. Metro also surprised workshop attendees with a state-of-the-art battery bus prototype that we took for a test drive across Lake Washington to tour Eastgate Park and Ride to learn how buses charge using our state-of-the-art fast charger. Watch a video with the Executive on the benefits he sees of a zero-emission bus fleet:

If you want to ride the future today, Metro is now operating three battery buses in revenue service on Routes 226 and 241 on the Eastside, serving some of the county’s densest job centers including Microsoft and downtown Bellevue. With a range of 25 miles, they’re quiet, emit zero emissions, and need to be charged for only 10 minutes before returning to service, and by early 2018 we expect to inspect and accept the next batch of eight fast-charge Proterra battery electric buses. 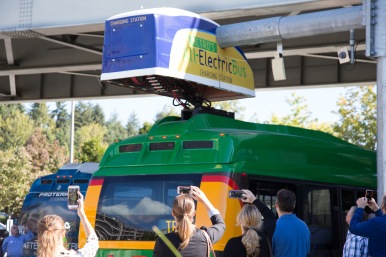 We are also testing new extended-range models. By the middle of 2018, riders in South King County will see up to 10 battery buses on the streets from three different manufacturers, all with an extended range capable of powering 140 all-electric miles on a single charge. This test will include four 60-foot articulated buses for testing. We’ve chosen South King County as a focus area for the first wave of battery bus deployment because we know these communities face disproportionate air pollution and health impacts, and we want to bring the benefits of zero-emissions buses there first.

King County currently operates more than 1,500 buses for Metro and Sound Transit Express – a fleet that consists of a mixture of diesel, diesel-electric hybrids, electric trolley and battery-electric buses. A lot more needs to happen to make a successful jump to the next generation of public transportation powered by clean electricity. However, with strong leadership from the top, and a committed team, Metro Transit is in the driver’s seat headed toward a clean transportation future.

Senior Strategic Communications Advisor to the Director of the King County Department of Transportation View all posts by Frank Abe, King County DOT